You are here: Home / My Korean Diary / How I’m Learning Korean – Day 30 of Learning 한국어 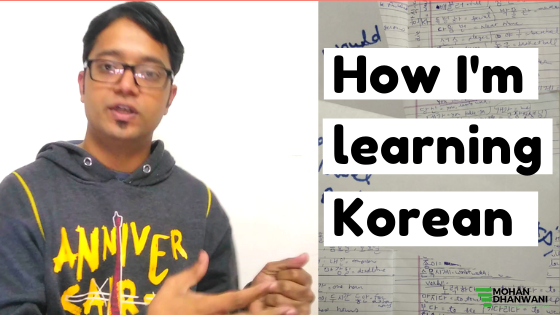 I’ve been learning Korean for 30 days now. And I think it’s ok to say that these days, I can read & understand some of the short sentences & words in Korean. I’ve even started to understand some words from K-pop songs as well.

Here, joke is in 바나나, 반하나 are almost same but last one means to fall for someone.

That’s actually in a song from 마마무 which is called 아제게그. In this song You can find some of the Gags that go around in Korea. So, if you want to know more of these Gags, Click here to watch the song 😉

So Yeah, it feels good when you start getting some of the things from Language.

How I learned till now:

So, let’s talk about the things that I learned in these 30 Days. I’ve been practicing Hangul, a bit of vocab, Grammar, and particles.

And, yes it was overwhelming at times.

When you have tons of new information flowing in, in short amount of time, it does happen. Still it’s been fun learning it, and so far, there were things that helped me along the way. These things helped me in putting the overwhelm out of the window.

And now, I think I’m back on track for learning.

So here these are things that I’ve done that helped me over these past 30 days:

This is a good start, when you are just starting to learn Korean. Like in any language, you usually start with letters and the writing system unless its your Native tongue. This playlist has most of the things you would need to learn the Basic  한글 letters.

On this website, I’ve read about some of the Vocab, basic grammar & particles (I’m on unit1 – lesson 13 for now). It mostly has text, but its good to switch up game. Again if you already have a Structured Video course or something of that sort, then that one would be best.

On this channel, I got to know the basic things from general prospective e.g. Bachim (받침다) means to support. So when we talk about the Bachim Consonants, we can say that those are supporting consonants as well.

While in bachim mostly people act different, and so do consonants… which is why those sound different ( Unless there is one vowel to support bachim in next letter ) – Just thought of this one :p

You can visit the channel at: https://www.youtube.com/user/talktomeinkorean

Lately I’ve started to watch 안녕하세요 (Thanks to K-Jin from KoreanClass101.com). Apart from getting some of the Vocab and getting to know the flow, it’s quite fun as well.

Apart from 안녕하세요, there are options like Abnormal Summit or Running Man. Just googling would get you some more options to watch 😉

This started when I copied a word while studying on howtostudykorean.com and pasted that in YouTube. For example, here is 홍대 시장 (Hongdae Market), when you search using words like this. You get to see videos around that word, and people who made those Videos. So first you start watching those, then You Subscribe & later watch other suggested videos.

This kind of helps in knowing the actual way of talking, as in vLogs people would usually use the words that they use in Daily life.

So it’s kind of a plus plus, where you get to clear things around the word e.g. 홍대 시장, and you get to know Vocab from daily conversation words as well.

Doing above things, helped in understanding bits and pieces of K-Pop Songs, which kind of works as encouragement. It’s like more you start to understand, more encouraged and confident you get.

These are a  must when learning a language, so used these some times, when thought of a word or when saw a word on Social Media, YouTube etc.

So this was the stuff about past 30 Days on my Korean Learning Journey.

What I plan on doing:

For next 15 Days, continuing as it is. From January, starting to learn things based on exam. In between, I’ll keep sharing things that I find that might help me & hopefully you as well if you are learning Korean.

So stay tuned, and subscribe to stay updated to see how much I learn before taking TOPIK-I.