You are here: Home / My Korean Diary / Learn Writing Korean Letter(s) in less than a Day : A Hangul (한글) Guide for Korean Learners 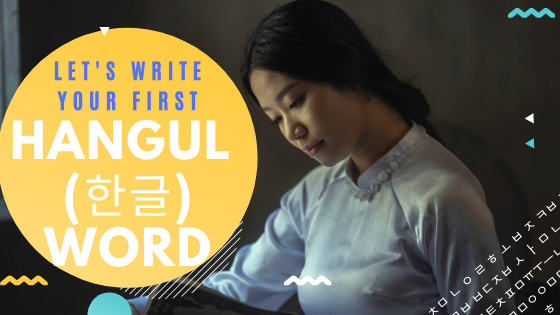 Korean writing system has these Hangul(한글) Letters which are 24 in Number. When I started learning Korean, I started checking other things about it as well. That includes who invented Korean Writing letters, What are these, When were these invented and more importantly letters itself. You know gotta know a bit of things that include Culture as well  😉

So in this blog post, I’ll share all the things that you would need to know to get started with writing your first word in Hangul or to say in Korean.

Hangul (한글) was created under King Sejong (fourth king of Chosun Dynasty) in 1446. Prior to the creation of Hangul, Korean people used to use traditional Chinese characters & Native Phonetic writing systems for writing.

And writing literacy was limited to people of higher class as writing required knowledge of Extensive Chinese Characters which only came with spending a lot of time and with the help of a teacher who already knew those Characters. So when it was introduced for first time, most of higher class people did stand in opposition of its implementation as that would allow common people to be able to learn writing as well.

For Hangul there was a quote, I think from the King himself about learning. It goes something like this:

“A wise men can learn Hangul before dawn (Overnight or can say in a Day & Night), and it would not take more than 7 Days for someone who is not that quick in learning.”

So it was something that made writing way easier for people. And even now if we compare it to Chinese or Japanese, it still is the easiest writing system. Although there are around 200 or so Hanja (Tradition Chinese Characters that are still used, but mostly those would be when things get way too formal e.g. on Sign Boards etc.) which are just needed to read the things on Sign Boards.

When comes to learning writing fast, it’s better than remembering more than 2000 Kanji Characters or 5000 Chinese Characters when it comes to writing.

Hangeul Day in South Korea is celebration on October 9. It is called as Hangeul Day (with an extra e before u 😉 ), or Hangeul Proclamation Day.

In North Korea it is celebrated on January 15 & is called as Chosŏn’gŭl Day.

There are 24 letters in Korean, that include Consonants & Vowels. Apart from these there are 27 digraphs which are just the pair of characters like ㅃ, ㅒetc. We’ll learn these as we go along with same. So first, let’s simply get started:

Note: Best practice would be to keep a notebook by the side, and practice writing these at the same time. Installing a Keyboard on Mobile & PC also helps when needed e.g. when learning how to type in Korean.

Consonants can be checked as in below table.

There are total 21 Vowels including digraphs as well, which are as follows:

So these are the all of the Hangul letters that you would be using to write in Korean. Again these letters would be as follows:

If you are thinking its too much of theory or want to learn these from Videos. Then, following is a good Playlist that I found on YouTube from KoreanClass101.Com where they explain about Hangul Letters in detail. Pay attention to how these sound and try to follow as well as you watch the Videos:

It is good to watch Videos & practice via reading as well. As ultimately we would be reading & writing. These do help later in pronunciation as well.

In 한국어, Consonants & Vowels are always best friends (Got this phrase from K-Jin from KoreanClass101.com). That means there won’t be a case that a word contains only a consonant or just a vowel.

If we write 아이 (ai) which translates to Children. If you notice there seems to be no consonant in pronunciation, so as we write we add “ㅇ” before the vowel sound. “ㅇ” doesn’t have a sound when put first in the word.

These are said to be in a block as the unit part of sentence (e.g in English there is A) gets written in the rectangle boundary. For example when we write “이” or “만” or “친구”. Word or inseparable parts of it are written in blocks. For example “친구” has 친 & then 구.

So here’s the thing again, words in Korean would be always in pair of Consonant & Vowel. There isn’t any word in Korean without a Vowel or without a Consonant.

For ease, we are starting with basic word structure of a Korean word or part of a word which contains a consonant and a vowel. For example “이” or “가”.

There are following points that we can grasp from below image:

Now once we know above basic, there are 2 more consonants that can be added to that part of word that are called as Bachim. Bachim(s) can be up to 2 per part of word, and these Bachims would always be added as below part of rectangular block as shown below.

After A & B are placed properly, below those we can add C & D which would be Consonants. C & D are totally optional and are only added only if a word contains it.

So part of a word only contains one Vowel and can contain up to 3 Consonants. These consonants & Vowel combos would always be in a rectangular block in Computer font.

When we write using hand and speed through writing it, rectangle becomes circle or eclipse shape, so do the words. So in Computers you would always find them in rectangular blocks but can’t be too sure when a person rights it.

For B same rules would apply as in simple “AB” combination. This would be the basic word structure or block in Korean letters.

How to Write Your First(s) Hangul Word

Now that we know the Basics about 한글  letters and word block structure, let’s write some words now.

Similarly following are some more of examples:

So now, what would be the word for Country in Korean. When it is said as “na-ra”? You can try creating this one, and if you hit any issues just let me know or if you have any queries 🙂

How To Study Korean Blog on Hangul: https://www.howtostudykorean.com/unit0/unit0lesson1

Hangul was created by King Sejong in 1446 as to simply the writing system of Korea. Hangeul Day is celebrated in South Korean on October 9th. There are 24 Vowels & Consonants; and 27 digraphs in Korean which can be used to write sentences.

Korean syllables or part of words are always rectangular blocks, and in these blocks there would always be a Consonant & Vowel together as best friends. There can be up to 3 total consonant friends in a block. Vowels in blocks are aligned in such a way that, Vertical Vowels are placed right wheres Horizontal Vowels are placed below the first consonant.

Now for the Best Study Practice, I would suggest: